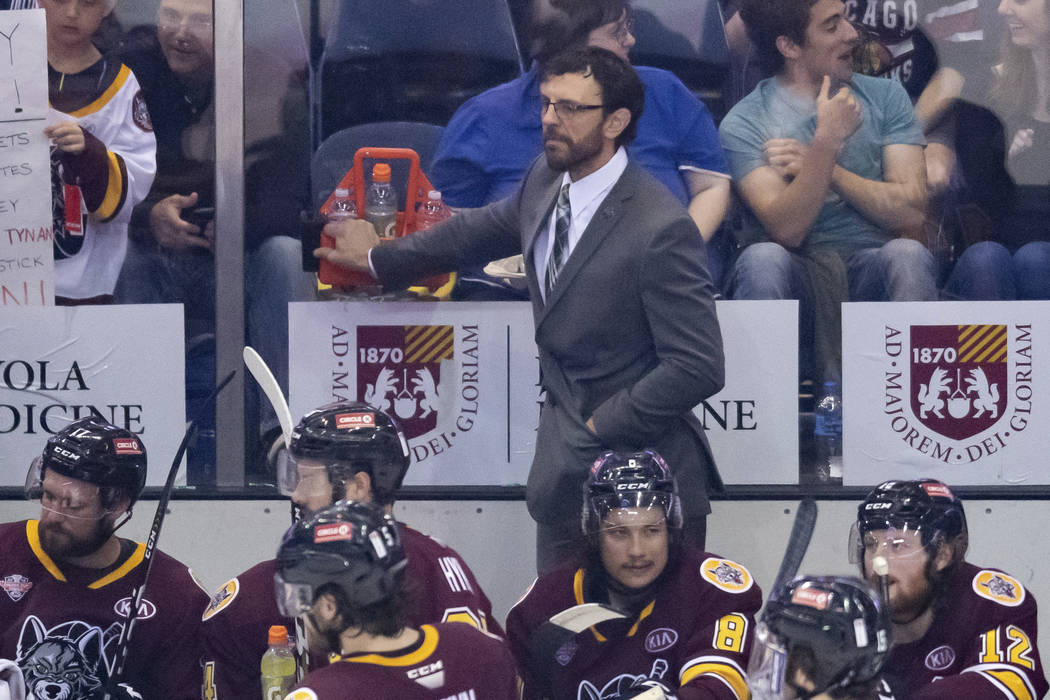 IRVINE, Calif. — So much of the focus during an NHL rookie camp is on the players and their dreams of reaching the highest level of the sport. It’s easy to forget that coaches have those same aspirations.

Rocky Thompson guided the Golden Knights’ minor league affiliate to the final of the American Hockey League last season, and the 42-year-old Chicago Wolves boss is one of the fastest rising NHL coaching candidates.

“I take the same approach that I want my players to (take) … I want to get better every single day. I want to continue to learn,” Thompson said. “When the time’s right and the opportunity comes, if it’s meant to be, it’ll work out and I’ll be ready for it.”

Thompson, who is behind the bench for the Knights at the Anaheim Rookie Faceoff, forged a rugged reputation during a playing career that saw him rack up almost 2,000 career penalty minutes in the AHL.

But the former enforcer has reinvented himself as a cutting-edge coach whose teams favor puck possession rather than a heavy, dump-and-chase style. Another example of that approach is Thompson’s willingness to pull his goaltender early.

“There will be a point when Rocky is an NHL head coach candidate,” McCrimmon said. “I think that it’s really important to be ready when that chance arrives. You don’t want to be in a position where you get your opportunity and you’re not quite ready for it. Then it’s a long time until you get another one.”

Thompson cut his coaching teeth in the Edmonton organization and was an assistant with Oklahoma City of the AHL for four seasons (2010-14). He spent the 2014-15 season with the Oilers as an assistant under Dallas Eakins.

But Thompson’s big break came in 2015 when the out-of-work coach made an impressive presentation on offensive zone schemes at the NHL Coaches’ Association. Windsor of the Ontario Hockey League hired him almost on the spot, and Thompson guided the Spitfires to an 81-40-15 record in two seasons and the Memorial Cup title in 2017.

Thompson signed with the Knights’ organization over reported interest from Vancouver, which wanted him as its AHL coach in Utica. In two seasons with the Chicago Wolves, Thompson has compiled an 86-45-21 record to go with a pair of Central Division titles.

“He’s unbelievable, especially from day one when I got to Chicago, he was so good to me,” Knights prospect Cody Glass said. “He’s always been a guy who’s not always in my ear in a bad way, but in my ear in a good way trying to correct me on everything, making sure I shoot the puck a lot.”

McCrimmon lauded Thompson for his work developing the Knights’ prospects in Chicago, and he could draw interest from clubs against next year.

Knights coach Gerard Gallant is signed through 2021, according to CapFriendly.com.

“Obviously it’s a goal of mine,” Thompson said of becoming an NHL head coach. “But it’s what I do day to day that I think, if I ever get that chance — if I’m fortunate enough or blessed — then I’ll be able to take advantage of it when it comes.”