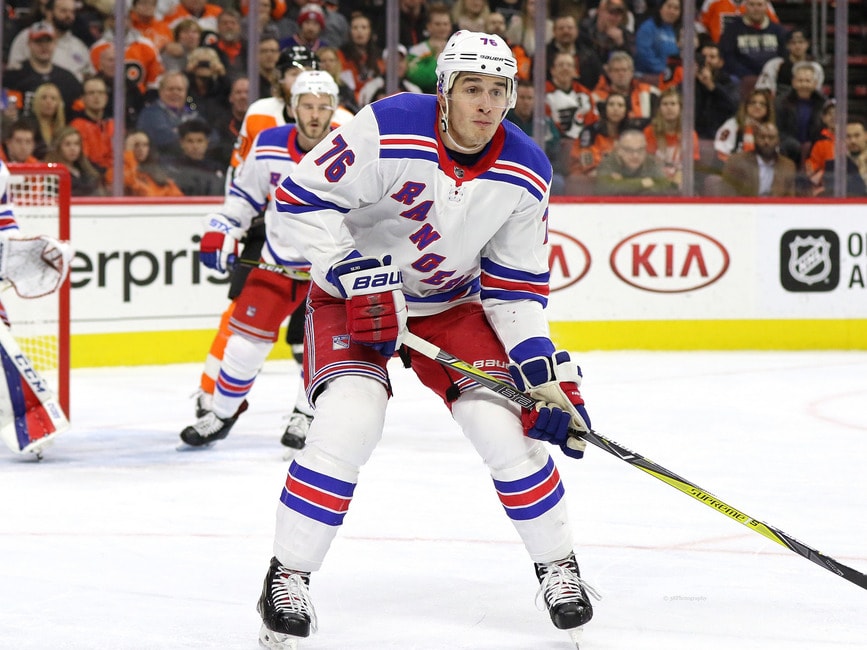 The New York Rangers defensive corps has been under constant scrutiny over the past few seasons. Much of that is due to roster changes, and even more of it is the emphasis on youth.

One of those young players is Brady Skjei. Last season was his third full season in the NHL. He played top-line minutes with various partners on his right side. Restricted free agent Tony DeAngelo and ex-Rangers, Kevin Shattenkirk and Neal Pionk, all saw time on Skjei’s right during the course of the 2018-19 season. For the 2019-20 season, he will likely be alongside recently signed defenseman Jacob Trouba.

After a bleak sophomore season in 2017-18, Skjei was under the microscope last season. Was he worth the brand new six-year, $31.5 million contract, signed right before last season?

Last season wasn’t amazing for Skjei, but it outshined his poor performance in 2017-18, when he was a minus-27. That was the lowest plus/minus on the Rangers roster and he also had the third-most giveaways with 62.

Although still a negative, his plus/minus was much better at minus-four in 2018-19. Another area that improved was his physicality. During the 2017-18 season, he had 127 hits in 82 games. Last season, he showed his strength by crushing the opposition 178 times.

Although Skjei had the same number of points in both seasons, there was one key difference. In 2017-18, he contributed four goals and 21 assists. Last season, he improved his goal scoring to eight and helped on 17 others. His boost in scoring goals is a good sign for things to come for the Rangers, especially with an offensive-minded defenseman in Trouba.

It wasn’t all sunshine and rainbows for him. Following head coach David Quinn’s emphasis on accountability and responsibility, Skjei found himself up in the press box as a healthy scratch for a handful of games because of poor performances at certain points last season.

Overall, last season was a disappointment for the Rangers, but it wasn’t all disappointing as some of the team’s youth began to blossom. Filip Chytil, Lias Andersson and Brett Howden were some of the forwards to make their debuts. On the defensive side, DeAngelo came into his own, Libor Hajek showed up to play and there was a glimpse of Ryan Lindgren at the NHL level as well.

One of Skjei’s best games last season was against the Washington Capitals on Feb. 24. Nearing the end of the second period, when the Rangers were down 3-1, he was trying to keep the puck from going past the blue line while in the offensive zone. He was being pressured by two Capitals, so he half-circled his skates to face the net and tossed the puck toward the goal.

Through a superb screen in front of the net by Jesper Fast, Capitals goaltender Phoenix Copely couldn’t see the shot in time. Skjei’s night didn’t end there, as he sent the game into overtime with a rocket from just inside the blue line with 30 seconds left in the game. Shattenkirk went tape-to-tape with Skjei who was winding up for a beautiful one-time slap shot.

Remember, Skjei may be going into his fourth full season, but he will only be 25 years old and is still among the younger players. He did not serve as an alternate captain, but this season he has a good chance of seeing an “A” on his chest.

Skjei didn’t have a career season in 2018-19 but he did turn his game around. That is why his final grade for last season is a B-. At the very least, he was the best Rangers defenseman. DeAngelo is a close second, but he didn’t have the same overall impact as Skjei.

When push came to shove, Skjei showed that he could handle the most ice time among Rangers defensemen with 1656 minutes, and second among all Rangers skaters behind Mika Zibanejad (1686). Being a part of the top pairing was a crucial step in his development. This season will show his full potential and whether or not he was worthy of that $5.25 million average annual value contract.

It will be a crucial season for Skjei and will show whether he can have two decent seasons in a row. With the buyout of Shattenkirk and the arrival of Trouba, all eyes will be on No. 76, and judgement will be made about him every single game.

Skjei had a decent season in 2018-19, but still has a lot to prove. But, that can be said about most of the roster. For now, he is a crucial player in front of Henrik Lundqvist and can quickly become a leader for the Rangers. Will he be able to manage two consecutive seasons with positive performances or will prove unreliable once again?