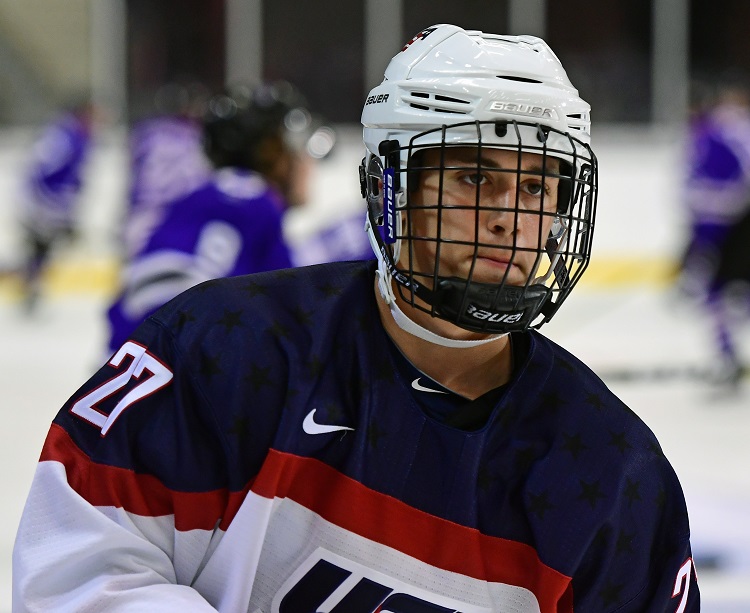 It’s no secret that hockey is an ever-changing game at the professional level. Attributes deemed as “NHL worthy” 20 to 30 years ago don’t necessarily make the cut anymore. In regards to defensemen, blueliners that only demonstrate strengths in their own zone are few and far between. In today’s NHL, every skater needs to be able to contribute offensively, even the guys with “defense” at the front of their title.

The Nashville Predators are an organization very familiar with quality offensive-defensemen. This season alone, the likes of Roman Josi and Mattias Ekholm are north of the 30-point mark and Ryan Ellis would be there too if it weren’t for an injury. Let’s not forget that both Shea Weber and P.K. Subban also manned Nashville’s blue line at a point in time. Remarkably, there is another defenseman marinating in the Predators’ prospect pool just waiting for his opportunity to shine.

Nashville’s third-round selection in 2017, David Farrance, is broadening his offensive skill set and becoming one of the most elite blueliners in the NCAA with Boston University.

Dating back before he was drafted, Farrance has always been seen as a blueliner with offensive upside. In his draft year alone, the Victor, New York native produced 54 points for the USNTDP. His freshmen year at Boston University was all about getting acclimated to his new surroundings, but in year two he recorded 20 points in 37 games. Up until this season, Farrance’s skilled passing took precedence in his playstyle. It was all about setting up his teammates for quality scoring opportunities. This season, that’s all changed.

Now in his third season with the Terriers, Farrance is establishing himself as a dual-threat, scoring his own goals with regularity. Through 31 contests this season, he’s lit the lamp 14 times for a Boston University team struggling to be among Hockey East’s elite. Yes, his assist numbers have improved as well; however, the jump in goals stands out the most.

As previously mentioned, Farrance was an established passer even before his college days. As a junior, his rise in assist totals can be attributed to an increase in playing opportunity. The increase in goals, on the other hand, demonstrates a development in his game that will only increase his chances of becoming an effective defenseman at the professional level.

Typically, it’s a rarity for a defenseman to lead his team in scoring. However, on a struggling Terrier team, that is the case with Farrance. His 39 points lead the way for Boston University with fellow Predators draft pick, Patrick Harper, three points behind him. Additionally, Farrance’s 25 assists are also a team-high. As for goals, senior captain Pat Curry leads the way with 17, but the 20-year-old blueliner is not far behind. With the NCAA regular season coming to a close soon, it is clear that Farrance has taken a leap in becoming one of the most offensively reliable members of his team.

What it Means for Nashville

For every drafted prospect in college, it’s all about one day signing your entry-level contract. Organizations awarding a player their contract after one year is a rarity but does it does happen. Of course, after a player finishes his sophomore season, the chances increases. Still, following a prospect’s junior year, especially when they aren’t a first-round draft pick, tends to be the most common time for a contract to be signed.

Just based on the information above, it is likely that Farrance signs with the Predators once this season with Boston University comes to an end. Yes, playing his senior year is still an option. However, that’s when uncertainty typically starts to crop up. Conversations surrounding whether Farrance wants to sign with Nashville will undoubtedly arise and that’s just unwanted press.

If you look past just the simple likelihood of a college player signing his entry-level deal after his junior year, predicting that Farrance does so with Nashville is still a smart bet. In his time with the Terriers, he’s not only become a top-notch blueline playmaker, but he’s also transformed into a valuable goalscorer. Playing his senior season would not negatively impact his growth, but it just is not necessary. Both Farrance and the Predators will benefit from him turning pro and continuing his development in either Nashville or with the American Hockey League’s Milwaukee Admirals.

In terms of Farrance making the Predators at the start of next season, it’s unlikely. Regardless, it can’t be denied that the organization has another premier offensive-defenseman waiting in the wings.