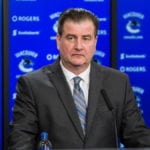 Harman Dayal of The Athletic:  Unfortunately, Vancouver possesses no first-round pick and has salary cap constraints. However, they are in a unique position. The Pacific Division remains mediocre and Vancouver could make a deep run in the playoffs. That is because of said division. There are a few targets the Vancouver Canucks should look at.

Ondrej Kase feels like the main target because his numbers should be better. Projections send him over 30 points with at least nine or ten goals. Kase drives things both offensively and defensively. He just needs better linemates. Those would be in Vancouver.

Kevin Fiala presents a dynamic playmaking skill set and is a year younger than Kase, who is 24. While he cannot play as well on the defensive end, the Minnesota Wild forward sets up as a good second-line addition nonetheless.

Then, there is Tyler Toffoli. The Vancouver Canucks reuniting Toffoli with Tanner Pearson would be intriguing. That Bo Horvat line could use the right-now upside of Toffoli. The question becomes can Vancouver pay the price for the winger? An extension needs to be on the table to pay the second round plus a prospect price here.

Finally, there are Erik Haula and Danton Heinen. Both are middle-six forwards who can play on the top-six. They would cost less than the other three players above, but all the other options would have to fall through. Jim Benning and the Vancouver Canucks considering these two forwards would not be a surprise, however.

Could Mike Hoffman be on the move?

Pierre LeBrun of The Athletic (notebook):  Mike Hoffman’s future rests in Florida’s hands. Could he be moved at the trade deadline? Hoffman becomes an unrestricted free agent on July 1 and so does Evgenii Dadonov. Florida signing both is unlikely and they do have Hoffman’s ten-team no-trade list.

With his 30-plus goal-scoring pace and Florida in a playoff spot, it appears the Panthers will not deal Hoffman. Florida expects to ride this out but they will listen to offers at the least. If the Panthers dive the standings, all bets are off. Hoffman will get moved.