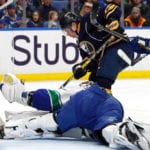 Bracco as part of a bigger deal?

James (@Account4hockey): Elliotte Friedman earlier this week on Sportsnet 590: The asking price for Toronto Maple Leafs forward Jeremy Bracco is high. Other teams have asked about him in the past.

After reported that Bracco is available, some teams are wondering the Maple Leafs are wanting to use Bracco as a piece in a bigger trade.

Oilers on Hall and Saad

James (@Account4hockey): Friedman says the Edmonton Oilers were interested in Taylor Hall but they weren’t interested in giving up a first and third-round draft pick or prospects like Evan Bouchard, Philip Broberg or Dmitri Samorukov.

The Oilers do have some interest in Chicago Blackhawks Brandon Saad but Friedman doesn’t think that the Oilers can make his salary cap hit work.

Canucks want to bring Markstrom back but have cap issues

James (@Account4hockey): Friedman says the Vancouver Canucks have made it clear that they would like to sign Jacob Markstrom to an extension. The Canucks are in a tough salary cap situation though. They haven’t had serious talks with Markstrom’s camp yet. Markstrom has been dealing with the passing of his father.

Sabres now have two players that have requested a trade

Darren Dreger: It’s already known that Buffalo Sabres defenseman Zach Bogosian has requested a trade. Forward Evan Rodrigues has also let the Sabres know that he wouldn’t mind being traded. The Sabres have already had his name out there.

Lance Lysowski of the Buffalo News: Evan Rodrigues didn’t deny that he’s not happy with the role with the team and that he wants more ice time.

“I’m a hockey player who wants to play hockey,” Rodrigues said outside the Sabres’ dressing room in KeyBank Center. “I think that’s pretty much, anyone out there will tell you the same thing. It’s a job, it’s a career. Just want to play hockey.”

Coach Ralph Krueger on players wanting out of Buffalo.