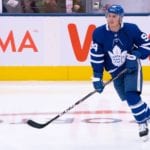 John Shannon: “For the record, Joe Thornton IS NOT going to Dallas.”

Joe McDonald: “Hearing the possibility Joe Thornton returns to Boston have cooled with just about 45 minutes until the deadline.”

Jimmy Murphy: “Here’s what I know on Joe Thornton at this second. He was -before today and again today presented trade scenarios involving him. To my knowledge, he hasn’t waived NMC for any. Yes #NHLBruins were discussed with him. We’ll soon find out what he decides. Sorry don’t have more”

On the San Jose Sharks

Matt Larkin: “Even though I can’t see a scenario in which Doug Wilson recoups a first-round pick today, he’s done a good job in the past week padding Rounds 2 and 3 in Sharks’ cache. Every pick counts for Sharks right now. Farm system is barren”

James (@Account4hockey): “Chris Johnston on SN590 at 10 EST: Thinks Tyson Barrie’s chances of being traded Thursday or Friday were 50-50, now probably 80-20 that he moves. Vegas is asking “what’s the real price?” in response to the Leafs ask of 1st and a prospect.”

Bob McKenzie: “Thirty minutes to the trade deadline, so things can change quickly on this day, but as of 2:30 p.m. ET, TOR is not close to trading Tyson Barrie.”

On the New York Rangers

On the Florida Panthers

On Ilya Kovalchuk and the Montreal Canadiens

Tony Marinaro: “Ilya Kovalchuk just said Marc Bergevin got a better offer from other teams but asked Kovalchuk where he preferred to go. Kovalchuk chose CAPS whose trade offer was inferior. Say what? I’d hope Kovalchuk in turn gave Bergevin his word that he’d resign with Habs in July..if not….”