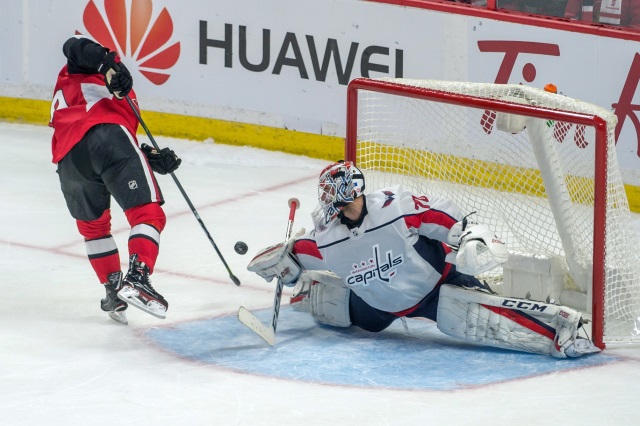 Bobrovsky the perfect comparable for Holtby

Holtby would like to remain with the Capitals, and would likely take a bit less than full market value, but not by much.

Sergei Bobrovsky is the perfect comparable for Holtby and he signed a seven-year contract for $70 million earlier this offseason. Holtby will be 30-years-old, same as Bobrovsky was when he signed. Their career numbers – regular season and playoffs.

Holtby is unlikely to get a no-movement clause from the Capitals with top prospect Ilya Samsonov and Seattle expansion coming.

Dorion on White, Chabot, and their payroll

Wayne Scanlan of Sportsnet: From an interview with Ottawa Senators GM Pierre Dorion. Dorion on how contract talks are going with Colin White.

“Respectfully, I don’t think we want to get into details about our negotiations for the simple reason that for us, it makes it harder negotiating through the public. But we want to tell our fans we know the importance of keeping our young core here for the long term. And we know that includes (Thomas) Chabot, White, (Brady) Tkachuk.”

On a Thomas Chabot extension.

“I’m pretty much going to give you the same answer, but we’ve had discussions.”

Dorion on having an actual payroll of around $47.5 million when other teams are spending around $80 million.

“First and foremost, the most important thing to us is the Ottawa Senators and making sure our team continues to improve and get better. I think you’d agree with me, spending to the cap right now would do us no good. We have the cap flexibility to sign this core group of young players going forward and that’s what we have to focus our attention on.”