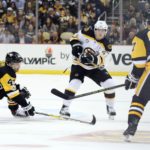 Dan Kingerski of Pittsburgh Hockey Now: Pittsburgh Penguins defenseman Marcus Pettersson is still without a contract as training camp is set to begin later this week.

A source said on Saturday that a deal could get done in the next three to four days. Pettersson has his visa ready and just needs to get a contract signed.

The Penguins may need to create some salary cap space.

Can the Bruins afford to keep Krug?

Steve Conroy of the Boston Herald: Boston Bruins defenseman Torey Krug is entering the final year of his contract. A perfect world would see him retire a Bruin.

He could be looking for anywhere between $7 and $9 million a season, but he did say last week that he might consider taking a little less to remain with the Bruins. He’ll still be looking for a good chunk though.

Can the Bruins afford both Krug and Charlie McAvoy, who is still awaiting a new big deal?

If they don’t think they can afford to keep Krug beyond this season, do they move him or do they hold on to him and take another run at the Cup with him?

Emily Kaplan of ESPN: Torey Krug admits that he’s searched his name on twitter because he wants “to see what rumors are out there” and he does so frequently.

“Would I take less to stay in Boston?” Krug says. “It’s something that I’ve talked about with my family and my agent. It’s something I’m interested in. How much less — that’s a question that will be answered at a certain time. I think something that’s fair will be able to be worked out both ways. As long as they want me, I think something could be done, realistically. Everyone does it. How much they do it, is kind of their own opinion and on their own circumstances.”

Krug adds that he won’t let his contract situation weight on his season, adding that he’s previously signed three one-year deals, so he’s “used to having to prove myself.”