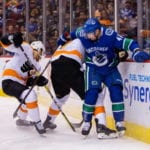 Not a full rebuild for the Devils, but more moves could be coming

Michael Dwyer of NJ.com: The New Jersey Devils won’t be going to into full rebuild after the trading Taylor Hall to the Arizona Coyotes. Hall’s trade is a sign that GM Ray Shero’s original plan wasn’t working and needed to be adjusted.

Nick Goss of The Athletic: The Devils may not be done making moves before the trade deadline.

Defenseman Sami Vatanen is one player who could be a trade candidate. The 28-year old carries a $4.875 million cap hit and is a pending UFA.

Forward Kyle Palmieri could be another trade option. Palmieri has a year left his deal at a $4.65 million cap hit.

Pierre LeBrun of The Athletic: The Florida Panthers did have trade talks with the Devils about Taylor Hall. thinks that the Panthers’ interest in Hall may have been tied to the belief that they have a chance of signing him to a contract extension. Get the sense that Hall and agent Darren Ferris are looking towards July 1st.

It didn’t really make much sense for the Panthers on the playoff bubble to go all-in on a big rental like Hall.

No takers for Baertschi

Ben Kuzma of the Vancouver Province: Vancouver Canucks forward Sven Baertschi cleared waivers again yesterday. If they can’t find a trade partner, he’ll likely remain in Utica (AHL) for the rest of the year. He has another year left at $3.366 million. The Canucks are not in a position right now to retain any of his salary.

The Philadelphia Flyers have lost four wingers in the past 10 days but don’t have the salary cap space to claim him.

“I’ve been talking to Sven’s agent since the start of the year — once or twice a week — to try and figure out any scenario where he can get back to playing in the NHL,” said Benning, who will revisit the Baertschi situation again in the offseason if he’s not moved. “We talked the other day and put Sven on waivers again.”