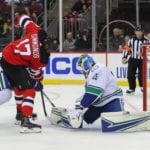 TSN: The Toronto Maple Leafs have been looking for a defenseman, and Cody Ceci is now hurt (out at least for a month). Is a top-four defenseman with term still a top priority? Darren Dreger said it is, especially with Ceci’s and Morgan Rielly‘s injuries.

“One of the key factors in a trade with the Los Angeles Kings on Wednesday night was the fact that the Kings retained salary, so the Toronto Maple Leafs are in good position with Kapanen, with Johnsson, maybe Alex Kerfoot, to make a deal if there’s the right deal.”

The LA Kings are not done

“Alec Martinez, a defenceman that has a year and a half left on his contract, he remains available. He’s not a guy that the Leafs were interested in, by the way, but a couple of teams that we believe have shown interest, include the Florida Panthers, who are absolutely looking to upgrade their blueline, as well to some degree the Winnipeg Jets. The price to get Martinez is believed to be a second-round pick and either another pick or a prospect. Nothing imminent it appears at this point, but a player that should be on the move.”

Does Micheal Ferland questionable status affect the Vancouver Canucks at the deadline?

TSN: Micheal Ferland’s status may have an effect on what the Vancouver Canucks may do at the trade deadline according to Pierre LeBrun. Ferland is expected to go to the AHL soon on a conditioning stint. Will the Canucks trust Ferland’s status a week before the trade deadline? Some within the Canucks may be hesitant and they’ve brought up a potential trade candidate internally.