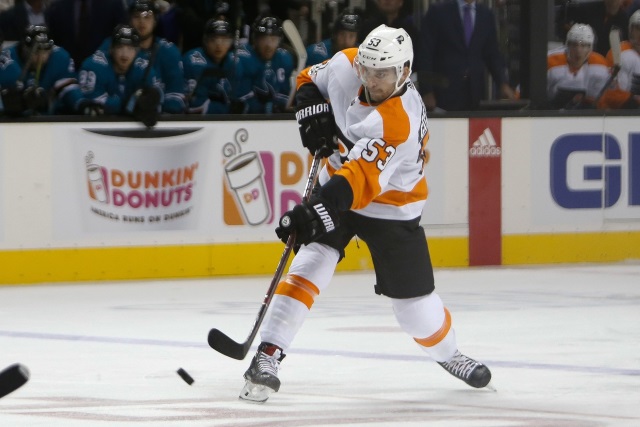 Thornton will be back with the Sharks … Marleau seems unlikely

Kevin Kurz of The Athletic: Joe Thornton said back in June that he wants to play for at least one more season. He is going to re-sign with the San Jose Sharks are some point.

It may be taking a little longer than expected as the Sharks could be looking for a reliable backup goaltender or they may also being looking at teams that are need to move some salary or a depth player.

There was a report from the Toronto Sun on the weekend that the Sharks are not interested in bringing Patrick Marleau back. Marleau was skating at the Sharks practice facility on Tuesday with Joe Thornton. Sharks GM Doug Wilson usually doesn’t like bringing in a veteran player that may take a spot from someone younger. Marleau playing on the fourth line doesn’t make a lot of sense.

Gostisbehere knows trade rumors are out of his control

“I haven’t really talked. Of course my agent’s gonna say, ‘Hey man, your name’s been thrown out there. Don’t listen to it,’ but obviously you keep tabs on it. My mom and my girlfriend, my support system, they always say to do what’s in my control and that’s me getting stronger and better and healing up from the season. That’s really all I can control. If I get traded, I get traded. I obviously don’t want to. I want to be here and be a part of what’s growing here and the step we’re gonna take forward this year, but again, it’s not in my control so I can’t really say. Obviously you’re gonna think about it because you have a whole life here but it’s the nature of the beast. It’s the name of the game. It’s part of playing in the NHL.”