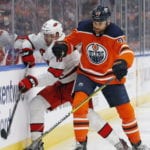 Oilers and Kassian to talk extension

Sportsnet: The Edmonton Oilers plan on meeting with Zack Kassian‘s rep to discuss a contract extension according to Elliotte Friedman.

“He’s happy there, the Oilers are happy with him and I believe that the Oilers and Kassian are going to sit down in the near future to see if they can get an extension done,” Friedman said Saturday on the Headlines segment of Hockey Night in Canada.”

Kassian is on pace to have a career year and is in the last year of a three-year deal that carries a $1.95 million cap hit.

Toffoli a more realistic option for the Bruins

Joe Haggerty of NBC Sports: The Boston Bruins need some secondary scoring and will look to add before the NHL trade deadline.

They will look at Taylor Hall, but Los Angele Kings winger Tyler Toffoli may be a more realistic trade target for them.

Ben Kuzma: Baertschi on being sent down to Utica after clearing waivers earlier this season: “I didn’t expect to be put on waivers and it came out of nowhere. All I could do is perform and play well and that’s what I did going back (Utica). A lot of people maybe thought I wasn’t going to do well, but nothing really changed with me.”

Ben Kuzma: Bartschi has asked for a trade.

Ben Kuzma: Wonder if the Philadelphia Flyers could be interested. They’ve lost Oskar Lindblom for the season, Travis Konecny is out with a concussion, and Scott Laughton and Tyler Pitlick got injured last night.

“Sometimes coaches want to take time, maybe the rest of the season before they come back,” Friedman said during Saturday’s Headlines segment on Hockey Night in Canada. “The word is, however, that depending on the situation, Peter DeBoer is willing to listen and will consider coaching this year.