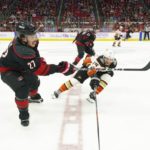 Elliotte Friedman: Need to keep an eye on the Carolina Hurricanes and Anaheim Ducks regarding defenseman Justin Faulk.

There have been ongoing talks between the two teams. There are still some details to be worked out.

Elliotte Friedman: Faulk has a partial no-trade clause and the Ducks are on it.

It is believed that the Ducks are interested in signing him to a contract extension.

Elliott Teaford: Was told last week that the Ducks GM Bob Murray was looking for a right-handed defenseman, so their ‘interest’ in Faulk makes total sense.

Elliott Teaford: The Ducks have plenty of salary cap space – around $8.5 million according to Cap Friendly. Faulk makes a little under $5 million this season.

James Mirtle: Faulk’s no-trade clause has been giving the Hurricanes some issues.

“As we plunge into RFA signing (or not) season, the three-year bridge contract Werenski signed is instructive in understanding some of the dynamics at work, specifically what is the Year 3 salary? AAV is, of course, vitally important but so is the level of compensation in Year 3.

With most (not all, but most) of these RFAs, a three-year bridge deal will leave them one year shy of UFA status when it expires. So the Year 3 compensation amount is important because that ensures the Qualifying Offer for the “fourth” non-contracted year is at least that much.

I keep hearing people say three-year bridge deal will work best for Mitch Marner in TOR. Perhaps. Many throw around $9M or 10M AAV but critical question is what is the Year 3 number? If it’s $12M or $13M and TOR has to qualify at that level and he’s one year from UFA, well…

The whole point of a bridge deal, from the club perspective anyway, is you are prepared to trade off risk of player walking into UFA in four years in exchange for a favorable, (relatively) lower AAV over the 3/4 years. A really high QO # in Yr 4 defeats purpose of the bridge.

Werenski‘s deal is much more likely to be a catalyst for the Charlie McAvoy (BOS) and Ivan Provorov (PHI) RFA negotiations than it is for Marner or any of the RFA forwards, but the three-year bridge structure could be a critical factor in any of these RFA negotiations.

Werenski will have salary arb when this deal expires. Or he could negotiate a long-term extension before then. But worst case, he’s gets a $7M QO in Year 4 and walks himself to free agency. So the three-year, $15M deal could be viewed as no worse than a four-year, $22M deal.

Odds are both Werenski and CBJ will want to get a long-term deal before he gets to UFA but the three-year bridge and fourth year QO is the floor for what player will get if he walks into UFA. It’s why the $ amount received in Year 3 is so important to viability of a 3-yr bridge.”