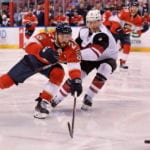 Bruins and Blackhawks had Saad talks

Jimmy Murphy: The Boston Bruins did talk to the Chicago Blackhawks about forward Brandon Saad. It was a multiplayer deal that involved a Bruins roster player.

Daniel Nugent-Bowman: The Edmonton Oilers have been talking contract extensions with pending UFA forwards Riley Sheahan and Josh Archibald. It’s expected that the sides can work out deals.

Daniel Nugent-Bowman: There have been no contract extension talks between the Oilers and pending restricted free agent defenseman Ethan Bear.

No reason to be concerned as have been told that they are waiting until the summer.

Craig Morgan: A source said that the Arizona Coyotes had significant interest in then Florida Panthers center Vincent Trocheck.

Coyotes GM John Chayka said they were in on a few other players but ended up sticking with what they already had.

Craig Morgan of The Athletic: Prior to the trade deadline GM Chayka had hinted that they may not do anything, and in the end, they didn’t.

“We were shopping on a different aisle,” Chayka said. “We were looking at some things that probably weren’t moving today. That’s not to take anything away from the players that were available. It’s just when you consider the cost of a rental, if a player is not really that impactful vs. keeping the status quo here, why do it? We’ve got (Michael) Grabner sitting out. (Christian) Fischer’s sitting out, Vinnie Hinostroza and Barrett (Hayton) have been in that mix. If you’re going to pay a price, you’d better make damn sure they’re ahead of those guys and we didn’t feel that way.”