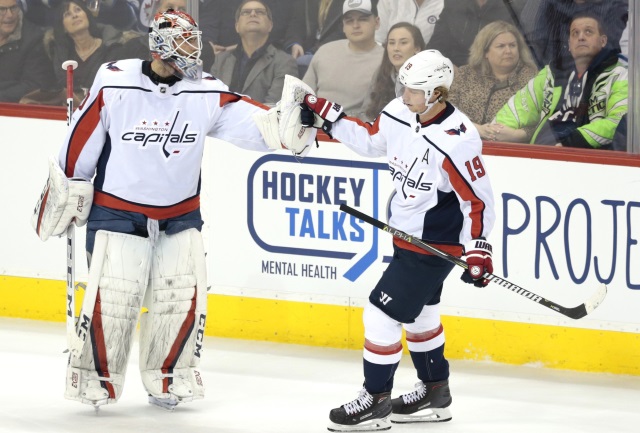 Back into the Braden Holtby dilemma and more Washington Capitals…

Tarik El-Bashir of The Athletic recently wrote (mailbag): Again, Braden Holtby gets asked about frequently and for good reason. The goalie won a Stanley Cup and has been such an integral part of the team.

With the signings of Sergei Bobrovsky and Andrei Vasilevskiy, it appears a market has been set. This appears to be a decision Washington makes at the end of the 2019-20 season. Ilya Samsonov remains the heir apparent for the 2020-21 campaign.

Then, there is Nicklas Backstrom. He is 32 and still producing quite well. However, his next contract must be approached with caution due to father time. Could he see a six-year deal around $9 million AAV? It becomes very possible. Backstrom is so valuable to this Washington team that a $6.7 million AAV or less is very unlikely.

Ilya Samsonov looks to be on the Washington horizon even for 2019-20 — as a backup. If Samsonov wins the “understudy” job, expect the Capitals to play him for some extended runs to see what they have in the goalie.

Brian McNally of NBC Sports Washington recently wrote:  Chandler Stephenson re-signing with Washington at $1.05 million AAV was good news and bad news. The good is that the amount was relatively low. Unfortunately, the bad is the Capitals stand $1.364 million over the salary cap. Teams can be ten percent over the cap until October 2nd but decisions do loom.

The roster features a full complement — 14 forwards, 7 defensemen, and 2 goalies. So now, the question is this. How long does Washington wait? They have training camp to sort out some position battles which include the fourth line. That may give them enough cap space along with the seventh defenseman spot.

Does Chandler Stephenson or Christian Djoos get moved before October 2nd? Tyler Lewington waits in the wings and has played two games for Washington. Washington bringing up a player from the AHL to replace Stephenson would not be surprising either.