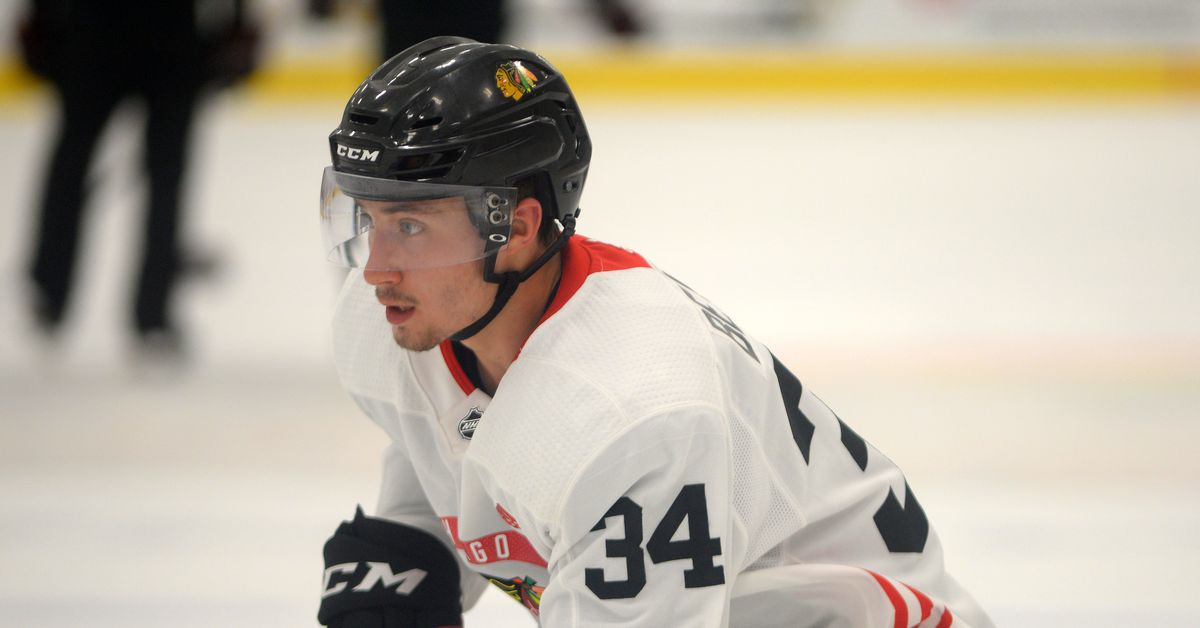 At just 5-foot-10 and 178 pounds, Nicolas Beaudin quickly realized that the jump from Canadian junior hockey to the American Hockey League would be extra difficult for him.

The Blackhawks’ second first round pick in 2018 — they nabbed Adam Boqvist eighth, then Beaudin 27th — has spent his first half of the season making that jump, and he’s finally starting to see results.

“It’s getting better,” Beaudin said this week in Rockford. “At the start, I had a tough time transitioning from junior to pro. But lately, I’ve been playing good. Defensively, I’m better, I’m quicker on guys, my gap’s better in the neutral zone.”

What the 20-year-old defenseman lacks in size and strength — though he’s been doing his best to gain in the latter category — he makes up for in intelligence and in-depth understanding of hockey.

That analytical mentality is what makes Beaudin most stand out as a prospect.

“I’m getting smarter, too,” he said. “I’m getting to know the league, how to play against bigger guys, so it’s getting easier for me. For sure I want to get stronger, but if I go into a corner against a guy that’s 220, I’m going to play smarter than him, that’s all.”

Any AHL defenseman can say that. But not any can actually overcome a 42-pound differential with cleverness alone.

Beaudin knows the exact formula, though, and can recite it immediately.

“My first three strides have to be really fast,” he said. “I have to try to get to the puck before him or at the same time as him, so he doesn’t have time to turn his back on me, so I can poke him right away. But if he does, I’ve just got to contain him, and I’ve got to keep his back on me so he doesn’t turn and make a play. So that’s the biggest thing.”

Beaudin’s hockey IQ comes from watching NHL games religiously on AHL off-nights, from working closely with IceHogs video coach Adam Gill and from having a coach for a father — Stephane Beaudin still sends his son clips all the time, Nicolas said.

IceHogs coach Derek King has been hard on him, too, to accelerate that development.

“He’s matured at a good pace, just not as quick as some other guys,” King said. “He’s on the right track. He’s gotten better as the season’s gone on. Now he’s getting more ice time.”

Beaudin entered this first professional season with an impressive track record as an offensive defenseman — he averaged more than a point per game, even from the blue line, his last two years in the QMJHL — but in need of defensive work, like most of the Hawks’ other upper-tier prospects.

His experience during the first half of the season has made him comfortable enough that he’s letting his natural offensive inclinations loose again. Over his first 21 games, he averaged 1.2 shots on goal; in his most recent 13, he’s averaged 2.0.

“I know I have the offensive side, so once you get the defensive side, I know I’m a more complete player,” he said. “Just trying to get some more shots on net.”

Because of their draft timing, Beaudin will always be compared to Boqvist. Considering the tremendous immediate success the latter has enjoyed with the Hawks lately, that could be seen as an unfortunate lens for Beaudin.

But he instead views it as a source of inspiration.

Thiessen contributing any way he can
Panthers Down Another Goalie, Injured Driedger to Miss Weeks
What’s behind the Gallant firing, DeBoer hiring for the Golden Knights?
THW’s Goalie News: Vasilevskiy Stays Hot, Fleury’s Tribute & More
Fantasy hockey: Goalies who could be the next Jordan Binnington