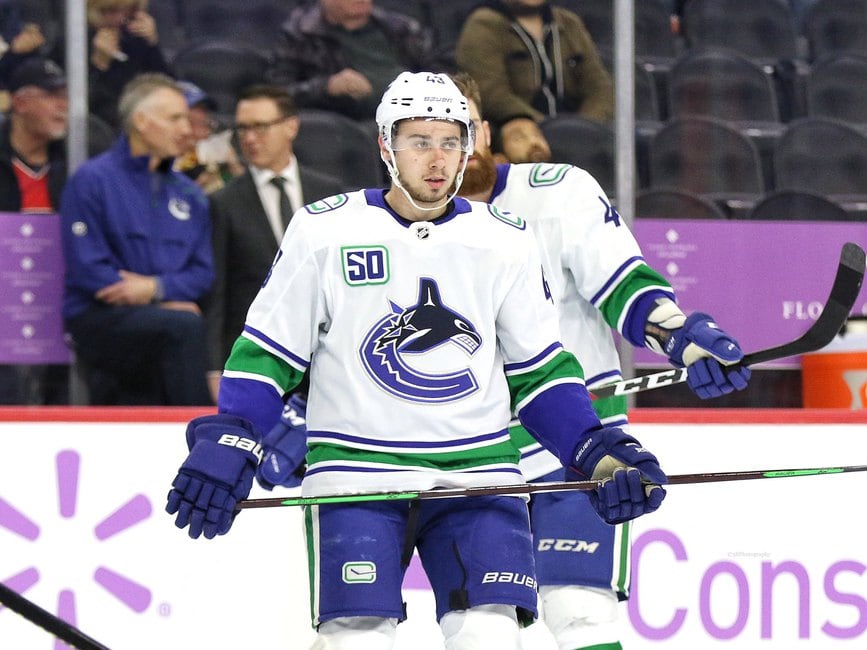 SAN JOSE, Calif. — Quinn Hughes had a goal and an assist, Jake Virtanen put Vancouver ahead and the first-place Canucks scored four unanswered goals in the third period to extend their winning streak to four games with a 5-2 victory over the San Jose Sharks on Wednesday night.

Tyler Myers, Brandon Sutter and Tanner Pearson also scored for the Canucks, who have won six of seven and 13 of 16.

Tomas Hertl and Brent Burns scored for San Jose, which had won four in a row at home and earned at least one point in five consecutive games at SAP Center.

“We weren’t happy after two periods,” Markstrom said. “Then we scored a couple quick goals. It was nice to get a two-goal cushion and then you know you’re just going to play. Good teams find a way to win, but you know, we always want to play a good game for 60 minutes. This is a huge win.”

The Canucks broke a two-all tie on a power play seven minutes into the third when Virtanen matched his career-high with his 15th goal.

Vancouver extended its lead to 4-2 on Sutter’s sixth goal just under a minute later. Pearson scored his 15th on an empty-netter in the final minute.

The Canucks trailed 2-1 in the third before Myers tied it with his fifth goal.

The Sharks snapped a 1-all tie on Burns’ 10th goal just under six minutes into the second.

Burns scored on a shot from the blue line off a long pass from Joe Thornton from just behind the goal line. Burns’ shot ricocheted off Sharks forward Kevin Labanc’s shin pad and skipped past Markstrom.

San Jose took an early lead on Hertl’s 16th goal, his second in three games after an eight-game drought.

Hughes scored his sixth midway through the first on a drive from the point to tie it for Vancouver.

Hertl went to the dressing room after crashing into the boards midway through the first. He was evaluated and did not return.

“It was tough on our rotation and our combinations when Tommy Hertl went down,” Sharks interim coach Bob Boughner said. “I think that changed a little bit of the complexion of the game and definitely the chemistry of our lines.”

NOTES: Canucks C Tyler Motte was taken to the dressing room after a hard hit from Sharks D Erik Karlsson late in the second. Motte sustained an upper-body injury and didn’t return to the game. No penalty was called on the play. … Canucks forward J.T. Miller had an assist to extend his point streak to four games. Miller has three goals and two assists during that stretch. He has nine points over his last seven games (four goals, five assists). … Markstrom is 7-0 in his last seven games in which opponents have had 40 or more shots. … Thornton is two points shy of 1,500. … Patrick Marleau needs one goal to pass Mike Modano (561) for 25th on the NHL’s career list.

Canucks: Play the Islanders in New York on Saturday.