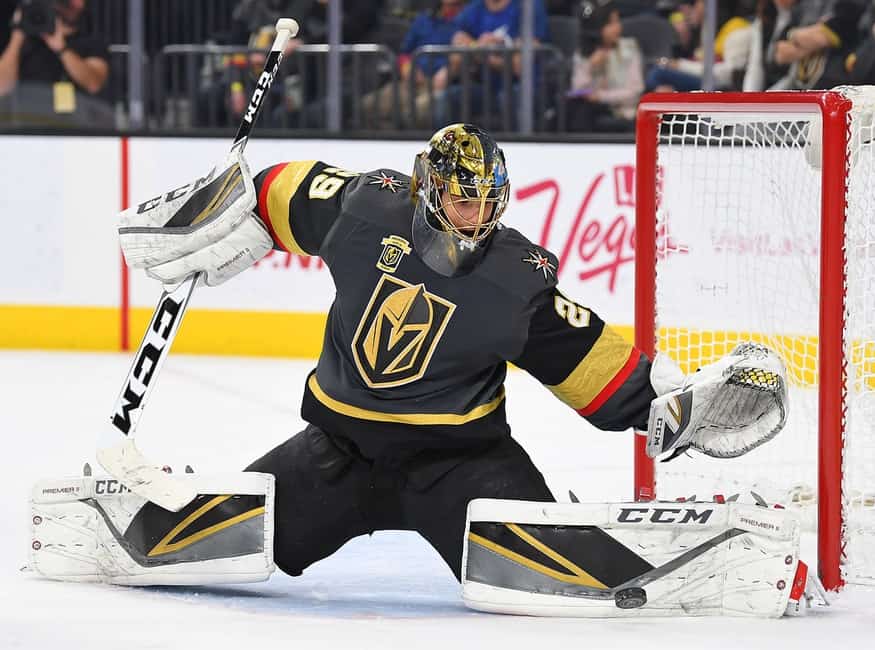 Once again, Marc-Andre Fleury bore the brunt of the Golden Knights’ goaltending responsibilities, playing 61 regular-season games and all of Vegas’ seven playoff games. Fleury posted a 35-21-5 record on the season, saving 1,593 of the 1,745 shots that came his way.

Despite a slightly higher goals-against average (GAA) and lower save percentage (SV%) than last year – 2.51 compared to 2.24 and .913 compared to .927, respectively – Fleury showed that he’s not slowing down after 15 NHL seasons. Fleury also recorded his second-highest shutout total in 2018-19 with 8.

Although the Golden Knights were eliminated in the first round of the 2018-19 Stanley Cup Playoffs, Fleury still posted some of his better postseason numbers. In seven games, Fleury ended up with a 2.70 GAA, .909 SV%, and a shutout.

Unfortunately, in two out of three chances to eliminate the San Jose Sharks, Game 5 and Game 7, Fleury ceded four and five goals against, respectively. Despite that fact, Fleury’s consistent play and solid numbers are a big reason for the Golden Knights’ continued success in their sophomore season.

Still, despite that drop, Subban did post a respectable 2.93 GAA and .902 SV%. Although not stellar, Subban did his part and seems to have solidified himself as a capable backup for Fleury. With the departure of number three goalie, Maxime Lagace, this seems, even more, the case.

The 2019-20 season will be a good indicator of whether the Golden Knights trust Subban moving forward by having him shoulder more of a workload. Or perhaps one of Vegas’ prospects with the Chicago Wolves, their AHL affiliate, will burst onto the scene.

However, Lagace did make history in 2018-19, becoming the only goalie to score a goal in the AHL’s Calder Cup Playoffs. He is off to the Boston Bruins now, so it’ll be interesting to see if he takes on a bigger role with them.

Overall, the Golden Knights’ goalies get a B+ for the 2018-19 season. Vegas benefitted greatly from Fleury’s consistently solid play all season; however, his inability to lock things down in postseason elimination situations plus the Golden Knights’ lack of a de facto backup are what brings their grade down.

Fleury shows no signs of slowing, but the Golden Knights are in need of a solid number two goalie whether it be Subban or an up-and-coming prospect in 2019-20.