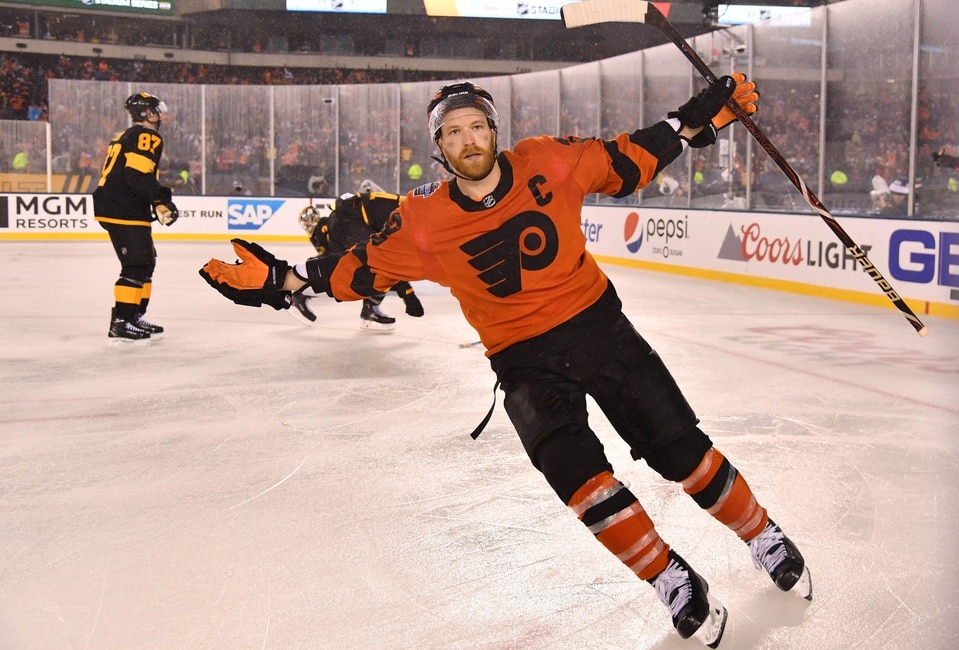 Since breaking into the league over a decade ago, Claude Giroux hasn’t been treated like an elite player, when in reality, it’s praise he deserves.

Why Giroux doesn’t get the publicity he deserves at a national level and is at most times criticized in the town he plays in, is anyone’s guess. However, it’s time to change the narrative and give him his proper due.

After breaking into the league slowly, Giroux has posted impressive numbers over a long period of time while also cementing himself as an all-time Flyers great.

Giroux Was a Steal in the 2006 NHL Draft

Highlighting the top of the 2006 NHL Draft was Erik Johnson, selected No. 1 overall by the St. Louis Blues. Johnson has gone on to have a respectable career, but like many players selected No. 1 in the draft in NHL history, he’s proven unworthy of that spot.

Aside from the obvious hits picked ahead of the Flyers selection at No. 22 in the 2006 draft, like Nicklas Backstrom, Phil Kessel, Jonathan Toews and, perhaps to a lesser degree, Jordan Staal and Bryan Little, there are a handful of teams who’d love a do-over.

Just some of the names picked ahead of Giroux were Derick Brassard, Kyle Okposo, Peter Mueller, James Sheppard, Michael Frolik, Jiri Tlusty, Ty Wishart, Trevor Lewis, Chris Stewart and Bobby Sanguinetti, along with David Fischer and Mark Mitera who never played a game in the NHL.

Two goaltenders were also taken ahead of Giroux, including Jonathan Bernier, who has had an average career in the NHL, and Riku Helenius, who played one — that’s one game — in the NHL.

While some of the players mentioned above have found success at the pro level, none come close to Giroux’s production over his NHL career.

Giroux’s 526 assists are second only to Backstrom (642) and only Kessel, Toews (No. 3, Chicago Blackhawks) and Brad Marchand (No. 71, Boston Bruins) have scored more goals than Giroux’s 236.

Giroux is Among the NHL’s Elite

In 2011, the Flyers made two shocking trades, shipping off two of their superstars in Mike Richards and Jeff Carter on the same day. While surely a turning point in Flyers’ history, it was also a defining moment for Giroux.

The trades of Richards and Carter made Giroux an offensive focal point in Philadelphia. Since that time, he’s delivered strong numbers that rival some of the league’s elite.

No player has more assists than Giroux (426) over that time period; Sidney Crosby is closest, trailing Giroux by 13 assists at 413 ahead of the upcoming 2019-20 season.

Giroux Is One of the NHL’s Most Durable Players

The quote, “the best ability is availability,” is a cliche, but like most commonplace phrases in sports, it’s extremely accurate.

In the case of Giroux, his availability over the years has rarely been in question and that availability has been one of the ingredients to his overall success.

In fact, the Flyers’ captain hasn’t missed a regular season game in three seasons, looking to play a full 82 games in a fourth straight year this upcoming season.

Giroux Is Already One of the Best Flyers Ever

Being a part of the first wave of NHL expansion back in 1967, the Flyers have built a rich history filled with historic moments and hall of fame players.

Entering the 2019-20 season, where he’ll turn 32-years-old, Giroux has already supplanted himself as one of the best to wear an orange and black sweater.

With some years left in his skates, he has left his mark in the Flyers’ record books and is likely to climb higher in certain categories.

Still far away from retirement, Giroux is already third all-time in games played in Flyers’ history. He has played 820 games as a Flyer, trailing only Barber (903) and Clarke (1,144).

Giroux’s path toward becoming one of the NHL’s best and most consistent players is a success story of sorts. He’s gone from a player who made his junior team, the Gatineau Olympiques, on a try-out to years later having a junior team in his hometown rocking his likeness as their logo.

“When I went to Gatineau, I just wanted to play hockey,” Giroux recalled. “My dream was to play in the NHL, but I didn’t think I had a chance.”

Back in January of 2018, the Flyers retired Lindros’ No. 88, lifting it up to the rafters along with the numbers of Bernie Parent, Mark Howe, Barry Ashbee, Barber and Clarke’s.

Someday in the future, Giroux’s No. 28 should join them.