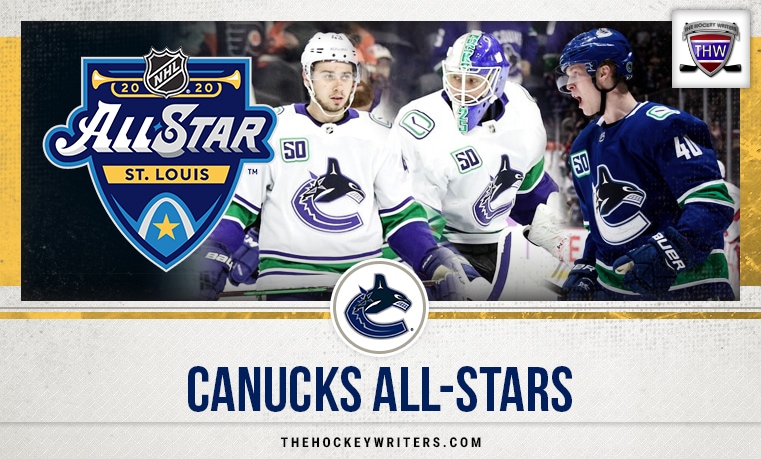 For the first time ever the Vancouver Canucks are sending a forward, a defenceman and a goaltender to an NHL All-Star Game. They have sent three players to it before, but never one from each position group. The last time that happened was back in 2012 when the Sedins and Alex Edler were selected for the annual showcase.

This season they will be sending two of their most exciting and dynamic players in Quinn Hughes and Elias Pettersson. Also joining them will be goaltender Jacob Markstrom, who is arguably their most valuable player this season.

Hughes’ selection via the Last Man In fan vote also marks the third straight year that the Canucks will be sending a rookie to the All-Star game. That’s quite a feat and nearly unheard of in NHL history. That’s a testament to the drafting of general manager Jim Benning and scouting director Judd Brackett. Not to mention the work ethic and skills of the players involved in the streak. He joins Brock Boeser and Pettersson in the legacy that is currently being created by the young stars.

The fact that three players from the Canucks are being sent to St. Louis this season showcases an exciting future for the team. Pettersson and Hughes are only 21 and 20-years-old respectively and are impact players in the NHL already. They are also key members of the new core that will be leading the team into the next decade and beyond.

So without further ado, let’s take a closer look at the seasons that brought them to the brink of representing the Canucks at the 2020 NHL All-Star Game.

Pettersson is a Two-Time All-Star

Pettersson is only 21-years-old and he’s already a two-time All-Star. I’m sure there’s many more to come as well. After being selected in his rookie season after an eye-opening first half, he will be going in as a veteran as Hughes and Markstrom attend the festivities for the first time in their careers.

Like any player coming off a fantastic rookie campaign in the NHL, there is always the threat of a sophomore slump. Pettersson must not have gotten the memo, because he has not seen a sniff of that. He currently leads the Canucks in scoring with 48 points (21 goals, 27 assists) and is on pace for 85 points which would shatter last season’s total of 66. He has also settled into his role as the superstar and center of attention in the rabid Canadian market that is Vancouver. Basically, he is here to stay, and we couldn’t be happier.

Related: The Canucks’ Elias Pettersson: Even Better in 2019-20

Joining exciting new addition JT Miller and Boeser on the vaunted Lotto Line, Pettersson continues to wow everyone with his hands, shot, speed, playmaking, and offensive creativity. The sky’s the limit for the young Swede, as he continues his march to becoming one of the most important players the Canucks have ever had.

It looked like the Canucks’ streak of rookie All-Stars was going to end with Pettersson, but then Canucks Nation got involved. When the NHL announced the Last Man In fan vote, fans took to Twitter to get everyone to vote for the man they call “Huggy Bear”. They prevailed as Hughes was announced on Saturday as the Pacific Division’s representative voted in by the fans.

Despite not being initially chosen by the NHL, Hughes is more than deserving of the selection. He is second in rookie scoring with 32 points, just one point back of the leader, Cale Makar of the Colorado Avalanche. He also leads all rookies in power play points and ice time. Additionally, he is on pace for 57 points which would beat the mark set by Dale Tallon in the 1970-71 season. Finally, he is one of the favorites to win the Calder Trophy awarded to the NHL’s top rookie. Talk about All-Star material.

Since Hughes was drafted by the Canucks in 2018, he has dazzled us with his skating, edge work, vision, and even his shot as he’s quickly taken over the quarterback position on the power play from veteran Alex Edler. He is also a trusted top-four shutdown option for head coach Travis Green on a pair with the steady Chris Tanev, a role he admits he wasn’t expecting.

I thought I’d be creating and getting points, but what I’m most proud of is that the coaching staff has trusted me in playing a shutdown role…I’ve played with Taney (Chris Tanev) against top lines the last month and that’s something I didn’t expect. And it means a lot to me.

Basically, at age 20 he has become a legitimate top-four defenceman in the NHL. Not bad for a rookie defenceman, wouldn’t you say?

I don’t think anyone would argue with me if I said that Markstrom was the MVP for the Canucks so far this season. He’s been phenomenal in the crease, saving the team’s bacon multiple times already. If it wasn’t for him the team would not be where they are today. He deserves every bit of the All-Star selection even though he wasn’t initially given the honor by the NHL. He’s faced 40-plus shots multiple times and has consistently provided the stable goaltending a playoff-bound team needs in their arsenal.

You have to just go back to the game on Sunday against the Minnesota Wild when Markstrom made multiple timely saves when the Canucks had a 3-1 lead in the final ten minutes of the game. His positioning, athleticism and mental game have been on point from the beginning of the season. You can also count the number of bad goals he’s let in on one hand and he’s rarely been the reason for a loss. That’s the stuff you want from your number one goaltender.

Although, we shouldn’t just credit him with the turnaround. Let’s take a moment to recognize goaltender coach Ian Clarke. The architect of Florida Panthers’ goaltender Sergei Bobrovsky and former Canucks Roberto Luongo and Corey Schneider has been a huge influence on Markstrom’s development. He has helped calm his mind when things unravel during a game as well as fix the positioning flaws that were evident before Clarke returned to the team. He’s every bit deserving of the All-Star nod as Markstrom is.

This is in no way taking away from what Markstrom has done. He has accepted Clarke’s tutelage to the fullest and has been rewarded for it. He also had the talents of an elite goaltender, all he needed was some subtle tweaks to his game for it to fully emerge. In the end, he is an all-star goaltender and I hope that the Canucks can keep him for at least a few more seasons until Demko develops enough to replace him.

With Pettersson and Hughes at the helm for the foreseeable future, and Markstrom manning the crease, for now, the Canucks finally have the pieces in place to battle for a playoff spot every season. The future is not only bright, but it’s exciting too as both Hughes and Pettersson are dynamic and creative players capable of getting you off your couch at any given moment.

We should also count ourselves lucky that we will be watching these two for the next decade. This is only the beginning, and that’s an exciting prospect in of itself. If this is Pettersson and Hughes now, what will they be like in five years? Now that’s something to think about.

The All-Star game should be fun to watch as we will get to see something that would never happen in Vancouver: Hughes and Pettersson on the same team as Connor McDavid. May be Pacific Division head coach Gerard Gallant will let us experience a shift with those three on the ice. If he does, it should be one hell of a show.