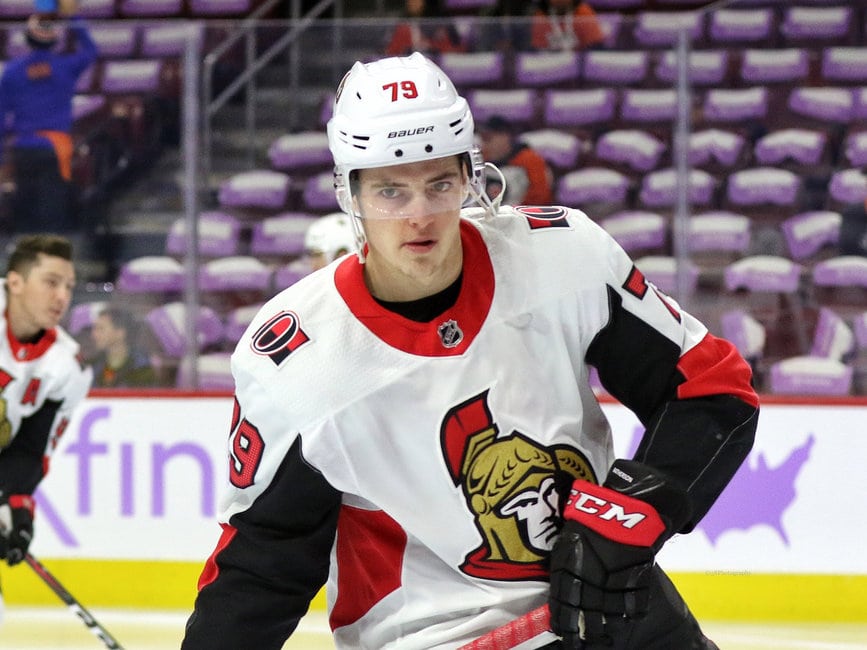 The Calder Trophy, despite being a trophy with such a limited pool of players to pick from, can always be a challenge to make a prediction for who will come out on top at the end of the season.

Take, for example, the star-studded 2014-15 rookie class, which consisted of fourth-round pick Johnny Gaudreau, sixth-round pick Mark Stone, and first overall pick Aaron Ekblad, with Ekblad taking the trophy home. Anyone who had Gaudreau and Stone on their Calder list at the beginning of their season was lying, or a time traveller.

Even looking at this last 2018-19 season, AHL journeyman Jordan Binnington was the runner-up after being an injury call-up earlier in the season. The amount of variability that comes with this trophy sometimes can be difficult to predict so while Calder lists can include the obvious candidates like Kaapo Kakko and Jack Hughes that have the best percentage of winning, this list will attempt to take a stab at some underrated candidates that may have gone under the radar.

The Recipe for Success

NOTE: Correlation does not equal causation. Conclusions are merely observations of patterns in the data and in no way is suggesting that a Calder winner must fit under these statistics to win.

So, in order to predict, first, we have to look for patterns when it comes to how Calder Trophy candidates even become candidates in the first place. Looking at past results, nine out of the 10 last winners of the Calder Trophy have been between the ages of 18-20 with only one being 24 (Artemi Panarin). While an argument could possibly be made towards voter bias, a better way of looking at this data is players in the NHL can start producing relatively early at an NHL level. Compare to this to sports like baseball or football where a 19 or 20-year-old winning the rookie trophy is almost unheard of.

Another interesting part of the data to look at is the plus/minus numbers, the last 10 winners of the Calder Trophy are all above even, with the only exception being Jonathan Huberdeau in the lockout-shortened 2012-13 season, who took home the hardware with a minus-15 rating. Since this is such a significant, uncommon outlier, Huberdeau’s year will be thrown out of the mean.

Out of the remaining nine skaters, the average plus/minus for a player is plus-9.111, rounded down to plus-nine. Since the only real use for plus/minus is to determine how good a player’s team is, we can make the assumption that players are generally either the best players on bad/mediocre teams with slightly positive plus/minus numbers (0-9) or middle/top-six players on playoff contenders with great plus/minus numbers (11-20). With this in mind, we can generally eliminate players who won’t be getting top/sheltered minutes on teams without a lot of star power.

Finally, the third piece of data I wanted to look at was time on ice (TOI). Voters aren’t necessarily looking at efficiency in terms of scoring, but rather volume. A player who plays 20 minutes a game, averages fewer points in 60 minutes and gets more total points versus a player who plays 13 minutes a game but is more efficient will always get overlooked. Once again, the data was taken from the last ten Calder winners, the average was taken and came out to 18:50 of ice time.

Obviously, Aaron Ekblad and Tyler Myers will boost these numbers since they are defensemen compared to forwards, but no matter which player, they were always getting at least 16 minutes of time on ice a game which is generally around how much your top-six forwards would play. So with those three in mind, let’s try and make some educated predictions and I encourage everyone to do their own research and potentially come up with their own conclusions as well.

The 2018-19 season was quite a special one for Senators prospect Drake Batherson. The Nova Scotian, American-born fourth-round selection in the 2017 NHL Entry Draft surprised many, after putting up 62 points in 59 games for the Belleville Senators of the AHL. His game consists of mainly his ability to read plays and make the right decision, but he also boasts a good shot and solid playmaking abilities.

Not only will Batherson be a 100 percent lock for the NHL roster next year, he really could earn himself top minutes with lots of the Senators roster consisting of younger or depth players which perfectly meets one of the criteria listed above. Not to mention, Batherson has some NHL experience under his belt already with nine points in 20 games last season.

Of the players on this list, Batherson will easily be one of the top contenders for the Calder all season and the Senators situation definitely provides him with every opportunity to shine. If anyone outside of the obvious candidates is going to take a crack at that Calder trophy, Batherson will definitely be up there and will mostly be shadowed in Calder talks by another Senators prospect, Erik Brannstrom.

Throughout his entire time playing hockey, Bemstrom has shown his elite ability to score goals, along with using his fast skating and his hands to create open space, so he’s not just your typical one-dimensional sniper with a shot. The Blue Jackets found themselves in a scenario where they went all-in, trading for numerous players at the deadline like Matt Duchene and Ryan Dzingel hoping that they could convince Sergei Bobrovsky and Artemi Panarin to stay.

Unfortunately, that wasn’t the case – they lost both players along with all the players they lost at the deadline. Bemstrom will benefit from going onto a roster that will be looking for production from all their players, including another potential Calder candidate in Alexandre Texier. Bemstrom could really make a name for himself if he finds himself on a line with Pierre-Luc Dubois and Gustav Nyquist, which is very likely. Elias Pettersson is a perfect example of how SHL dominance can translate to the NHL, and Bemstrom needs to be on people’s radars heading into this season.

Poehling already put himself on the radar amongst hockey fans with one of the most memorable NHL debuts in history, scoring a hat trick and a shootout winner to give the Canadiens the win in the last game of the season.

While this is just one game of sample size, it’s quite encouraging to see he at least has the ability to put the puck in the net at an NHL level. Poehling’s game involves using his quickness and hockey sense to create plays, along with being very sound defensively in his own zone. His resume consists of a season in the NCAA last year where he put up 31 points in 36 games and then obviously has three goals in one NHL game thus far.

While the Canadiens have some respectable depth at the center position with guys like Jesperi Kotkaniemi, Max Domi, and Philip Danault, Poehling could find lots of opportunities on the power play and could potentially suit up on the weaker depth of the RW. Overall, a very solid candidate for the Calder Trophy.

Defensemen can also win the Calder Trophy, so it’s always great to include one blueliner who could potentially win it.

Noah Dobson is one player who will get overshadowed by the Cale Makars and Erik Brannstroms on the lists. The 2018 first-round draft selection has shown an immense ability to not only defend his own zone but to help put the puck in the opposition’s net. Dobson started the 2018-19 year on a pretty terrible Acadie-Bathurst Titan team, only getting 16 points in 28 games before getting traded to the Rouyn-Noranda Huskies and absolutely flourishing in the second half, putting up 36 points in 28 games, along with 29 points in 20 playoff games.

Dobson is the only player who is not a lock to make the NHL roster on opening day, however, provided he does make it, has the most potential out of any non-obvious defensive prospect. One big issue on the Islanders is their lack of ability to create offense from the blueline, with their highest defender only reaching 37 points in 82 games (Ryan Pulock).

The need for an offensive defenseman is dire in today’s NHL, and Dobson could be the offensive spark plug that their blueline desperately needs, especially considering the loss of goaltender Robin Lehner. If the Islanders want to win more games this year, they’re going to have to be better than 21st in goals-for this season and Dobson potentially getting first power-play along with top-pairing minutes is definitely a possibility.